How To Play American Acey-Deucey

Here is the starting position of Acey-Deucey with a 1-2 as a sample roll: 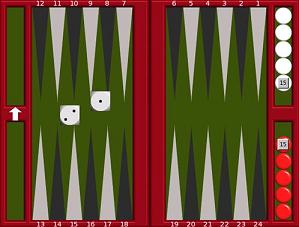 All 15 checkers start off the board. One die is tossed by each player to see who rolls first and the player with the higher number then tosses both dice to start the game. White moves his checkers counter clockwise in the diagram above, towards his home board on the lower right while Red moves in the opposite direction or clockwise to his home board on the upper right.

Obviously you want to get all your checkers in as soon as possible so that your opponent does not come around quickly, and make points in his own home board that will block out and hamper your remaining checkers from getting into the game. You should at least get some in and start a blockade and keep points in your opponent’s home board that can be used as landing spots for the rest of the checkers not in yet.

The game is then played according to the classic backgammon rules:

– Two or more checkers on a point blocks the point.- A lonely checker (blot) can be hit and sent back to be re-entered.- You play your dice rolls as separate numbers and if either only one or the other number is playable you must play the higher number.- If you roll a double such as 4-4 you play the number four times.- All checkers must enter the home board, before a player may begin to bear them off.

However, there are two elements in this game that are different than regular backgammon. One is used during the bear off stage and the other is a special feature when you roll a 1-2.

The Bear Off: You may only bear off checkers using the exact numbers rolled on the dice. If for example you roll a 4-2 you may only remove a checker from your 4 point and another from your 2 point. If you do not have any fours or twos remaining, you cannot use the 4-2 to take off a 6 nor can you move checkers from higher points to lower points using the 4-2.

The Roll of 1-2: If you roll 1-2 and can move both the 1 and the 2, you then choose to play any double you desire without rolling the dice: example 6-6. You then play your four sixes and get to roll and play again. If you roll a 1-2 again, you play the 1 and 2 and again get to choose any doubles you wish, and so forth.

However, remember that in order to choose a double you must be able to play the 1-2, meaning that if either or both ones and twos are blocked, you make the move you can, but your turn ends there. Similarly, if you choose a double like 6-6 and can only move three of the four sixes, your turn also ends there, and you do not get the chance to roll another 1-2.

Although the roll of 1-2 significantly increases the luck element in the backgammon game there is still a lot of skill required as many backgames will be played when you have 15 checkers back.