American Acey-Deucey is a variant of backgammon that has been played by the U.S. Navy since the early 1900s. The game probably stems from similar variants played in the Middle-East or other countries around the Mediterranean Sea, such as Greece and Turkey, games in which all the checkers start off the board or all on the furthest point of the board.

Though generally recorded as being played since World War 1 (1914-1918) at least one photo in a Department of Navy album shows two Chief Petty Officers enjoying a game of Acey-Deucey some years before that on the deck of the USS Baltimore, circa 1904-06. 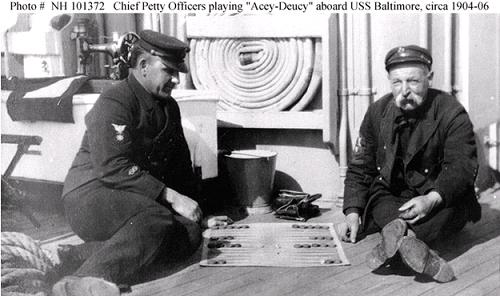 Also mentioned in the same Navy journal (which is currently offline) is that playing Acey-Deucey was one way Navy pilots killed time before going on a mission.

In fact, Acey-Deucey Clubs and Lounges have existed in the Navy and are mentioned in the “Glossary of Military Terminology, Jargon, and Slang” compiled and edited by Jeff Crowell where it describes an “Acey-Deucey Club” as a club “for E-5 and E-6 enlisteds (Second- and First-Class Petty Officers USN)”.

Crowell’s Glossary also defines Acey-Deucey as a version of the board Backgammon game “traditionally played in off-duty hours”.