By Michael StratoToday we know, which are some of the best backgammon books, but when backgammon was so popular back in the 1960s and 1970s and before Paul Magriel’s famous tome Backgammon published in 1976, what backgammon books existed to help people become better players? 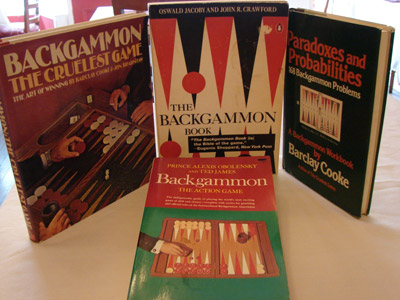 In the book Backgammon – The Action Game written in 1969 by Alex Obolensky and Ted James, there is a claim that Obolensky was credited with the first system of teaching the game. He was known as Prince Alexis Obolensky, the Father of Modern Backgammon, who organized the first major international Backgammon tournaments, starting with an event in The Bahamas in March, 1964. 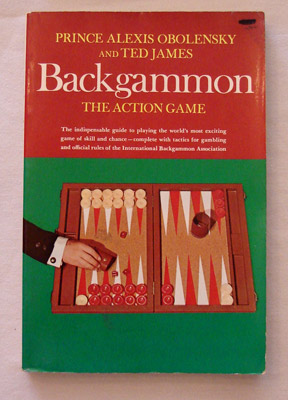 As in many backgammon books, Obolensky and James first explain the backgammon rules and basics of the game. Then there are various chapters on defensive and offensive strategies, such as how to play the opening rolls, the use of the doubling cube and even how to utilize psychology against an opponent.

There are also sections in this backgammon book on the game’s history, tournament regulations, and how to play variations of the game, such as Chouette, Moultezim, Plakato, Gioul and Eureika.

Another one of the best backgammon books available during the heyday of backgammon is one you can still find in some used book stores. First published in 1970, it is called The Backgammon Book and was written by Oswald Jacoby and John R. Crawford. In that era, both authors were very well-known players at international backgammon tournaments and between them had won at least eight titles. 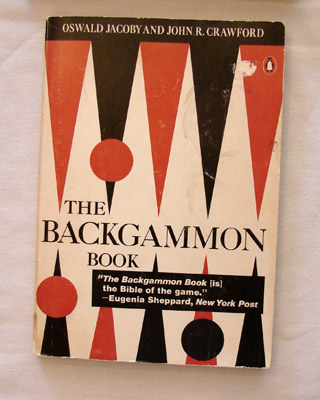 Of the many backgammon books published then and since, The Backgammon Book by Jacoby and Crawford probably has the most extensive history section – if you can unearth a copy of the large-size, soft cover edition published after 1976, you will find that the history section has almost 50 pages and includes many images of art and photos that go back many years, such as a picture of one of the first gaming boards that existed around 2600 B.C. on display at the British Museum.

The Backgammon Book had rave reviews back then, and in its time was considered one of the top backgammon books. Eugenia Sheppard of the New York Post proclaimed, “The backgammon Book [is] the Bible of the Game.”

Asserting itself to be the basic and authoritative of backgammon books, Richard Frey of Sports Illustrated said “…with the simplest and clearest of instructional writing… I can’t remember a book that makes learning a new game more alluring and easier.”

Another writer of some of the best backgammon books of the 1970s was Barclay Cooke. In 1974 he co-authored with Jon Bradshaw a book called Backgammon The Cruelest Game, which explained the fundamentals as well as delved into some of the “extraordinary paradoxes, subtleties and nuances” of the game. 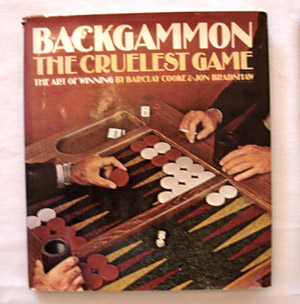 Later in 1978, Barclay Cooke published one of few backgammon books back then that was entirely dedicated to position problems. The book’s name was Paradoxes and Probabilities 168 Backgammon Problems. It was considered “A Backgammon Workbook” with Cook’s comments on the positions and it was made up of three main sections – 1) Openings; 2) The Middle Game; 3) The End Game. 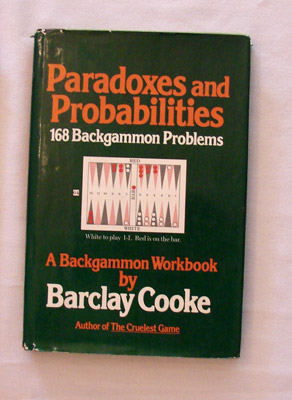